Section 1: A Re-Introduction to Forced Migration: When the Facts Change…

Section 2: Free Movement and Belonging in Europe: The Situation of the Romani Peoples

A Re-Introduction to Forced Migration: When the Facts Change…

…What do we do with our opinions? Even when our public discourse meets the bare minimum standard for avoiding overt xenophobia, forced migration is not always what we think. What is visible about forced migration and those who experience it is not always the full picture. Many of us still tend to think in the categories of “lawful” and “unlawful” movement, without asking why certain behaviors are considered unlawful — and if they should remain so. Furthermore, beyond the narrow canonical definition of what makes someone a refugee (generally fleeing war or genocide) families and individuals can be forced from their homes for any number of reasons.

The books, articles, and film below — some produced by people who’ve experienced displacement themselves — discuss a selection of these scenarios, following families evicted from their homes, people sold into slavery, or experiencing confrontations at and with national borders, communities fleeing warming seas and rising ties, and rejecting the power of the citizen/non-citizen binary, and more. This collection is transnational, with an accent on the U.S.A., but is not possible to account for all the aspects of worldwide forced migration in a list of sources as short as this one. Instead, consider this a re-introduction to the topic — one that forces us to question the staid, flattening accounts of “deserving” and “undeserving” immigrants, in order to have a more nuanced conversation on movement, belonging, and the political demands of people who have experienced displacement.

On borders: crossing them, and who gets to describe them

Noted theorists and activists Gloria Anzaldúa and Achille Mbembe weigh in on borders — both physical and internalized — while distinguished author Suketu Mehta provides a sharp critique of common assumptions about borders and migration in the U.S.A. Finally, then-undergraduate student Saúl A. assembles a multimedia, personal-political account of borders, family, trauma, and hope, and Elke Sasse collects footage shot by refugees crossing into Europe from Syria, Afghanistan, and Eritrea.

On money: two “non-standard” interpretations of what forced migration can look like and how to address the profit motives that fuel it

American journalist Aryn Baker and American sociologist Matthew Desmond offer incisive analyses of the slow-building, deeply entrenched crises of evictions and what is known as “the new slavery,” tracing the webs of money and profit that tie together labor markets, rental income, and forced movement.

On “deservingness:” the words we use and the judgments they carry

Dina Nayeri and Steine Ravn et al approach the expectation of gratitude placed on resettled refugees and migrants — Nayeri from personal experience and literature, and Ravn et al from European policy — and take to task the “othering” that happens in subtle ways to people newly arrived in Western societies. Academics Carol Farbotko and Heather Lazrus examine how Western categories of mobility (“refugee,” “migrant,” “climate refugee,” etc.) are projected onto people facing steep challenges like climate change in other cultural and political contexts, and illuminate some of what is missing from policy conversations.

On belonging: losing and gaining homes, and making political demands

Syrian journalist and graduate student Riham Alkousaa offers a searching reflection on what a “homeland” can look like, and where (or who) it can be, while journalist Jose Antonio Vargas chronicles his life as an undocumented person in the U.S.A. alongside a history of American immigration policy. Journalists Rachel Aviv and Rachel Wilkerson focus on individual human stories of transition from one place to another, and how Filipina care workers and Black Americans moving northward in the 20th century experience the trials of losing one home and building others. Lastly, author and academic Viet Thanh Nguyen assembles a standout group of refugee writers to define and reflect on “refugee lives” as they live and understand them, and theorists and activists Luis Fernández and Joel Olson argue for a way of understanding belonging apart from citizenship.

Free Movement and Belonging in Europe: The Situation of the Romani Peoples 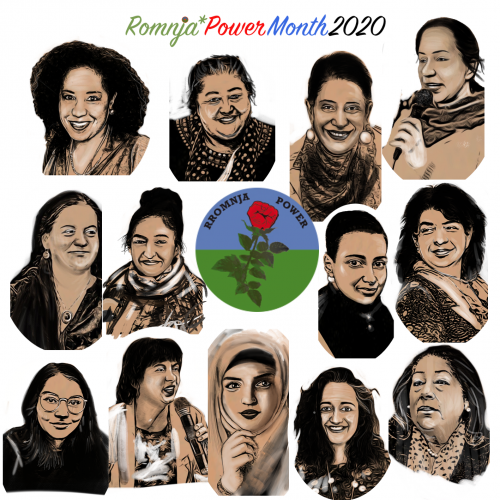 Image: Poster for Romnja* Power Month 2020, organised by RomaniPhen, an association based in Berlin, Germany.

A Deutsche Welle headline from 2013 reads: “Roma migration bothers ‘borderless’ EU.” This title sums up the hypocrisy of Europe’s “free-movement” rhetoric in the Schengen Area. The right to “move and reside freely within the territory of the Member States” as outlined by the EU Charter of Fundamental Rights is not granted to all Europeans. Time and again, the Romani people, the largest ethnic minority of Europe, are denied the right to free movement as well as many other human rights. On a deeper level, there is a rejection of Roma as being European even when they have been a part of Europe for centuries, are citizens of EU countries, and are native speakers of their country’s languages. In her book European Others, Fatima El-Tayeb explains how whiteness is weaponized as a tool of differentiation: some populations are “defined as inherently ‘non-European’ because of a racialized cultural difference linked to a non-European origin (an origin that, as is the case of Roma and Sinti, might lie centuries in the past).” The Roma illustrate perfectly that for many Europeans, there is the perception that there are no minorities in Europe, only “migrants.”

This bibliography attempts to reverse that assumption and to put into question the ways in which Europeans are implicitly thought of as White, while “race” is supposed to be a non-issue in Europe. I’d like to critically think about who we define as European, and to bring to light the discrimation and persecution that Roma people face, something that many Europeans are willfully ignorant of. Ultimately the goal is to learn about Roma history and culture through Roma self-representation and positive counter-narratives. The examples here span EU and non EU countries including Hungary, Spain, Montenegro, Romania, Germany, and the United Kingdom.

**Disclaimer: This selection is somewhat limited by the English language but I encourage European readers to research the history of Roma in their countries.

The first section highlights the discrimination and persecution that Roma face in Europe today. This includes hate crimes, systemic discrimination in the courts, by police and by the medical field, unfair migration and asylum policies, and racist dictionary definitions.

European Others, which for me was the most impactful resource, should help us think critically on who we define as European. The other two sources in this section show some attempts at reducing inequalities in the field of education, but that without real political will behind these policies, virtually no progress has been made.

Finally, these sources are European Roma-led projects and organizations that promote self-representation and positive counter-narratives, through film, music and historical narratives.